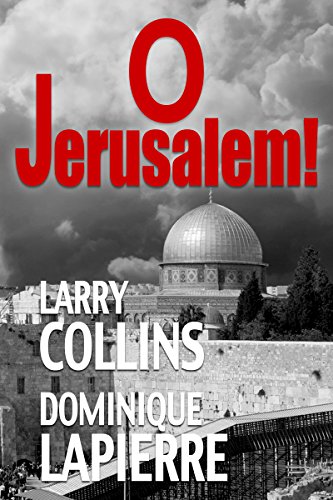 “It reads like a whodunit, and you turn page after page to see what happens next. … The pace is so swift, the drama so heightened by alternating flashes of tragedy and comedy that one has to stop frequently just to catch one’s breath and marvel.” —The New York Times Book Review

“A remarkable book… a history that not only clarifies the military and political events of the war but brings its human dimensions vividly to life.” —The National Observer

At the center of this massive and brilliant book is the most universal of man's cities: Jerusalem, the mystic heart of three great religions, condemned to pay for the passions it inspires by being—through forty centuries—the most bitterly disputed site in the world.

O Jerusalem! is the classic retelling of the spellbinding events of the birth of Israel. Moment by moment, Collins and Lapierre weave a brilliant tapestry of shattered hopes, fierce pride, and breathtaking daring as the Arabs, Jews, and British collide in their fight for control of Jerusalem.

Collins and Lapierre profile the Jewish fighters, from the commanders Ben Gurion and Golda Meir to the soldiers, rabbinical students, and refugees taken directly from their ships to fight; the Arab soldiers, from the explosives expert planting bombs to the charismatic chieftain whose death in battle doomed the Arab cause but inspired a generation of Palestinians; as well as the British efforts of peacekeeping after General Allenby’s conquest of Jerusalem and their departure in the face of the onslaught.

O Jerusalem! is a towering testament to the fiery birth of Israel and an unforgettable tale of faith and violence, of betrayal and indomitable courage.

Collins and Lapierre's story is the fruit of five years of intensive research and many thousands of interviews. This edition contains an introduction by Dominique Lapierre (translated from the original French by Larry Collins) as well as extensive biographical and chapter notes.

The enormous success of the international writing partnership of Larry Collins and Dominique Lapierre was based on the phenomenal bestsellers Is Paris Burning?, Or I’ll Dress You in Mourning, O Jerusalem!, Freedom at Midnight, and The Fifth Horseman. The last-named work was their fifth novel. Collins and Lapierre were a unique team in that each wrote in his own language and their works were then published simultaneously in French and English before being translated into sixteen other languages. Their work was distinguished by immense attention to detail and thorough research. Since the publication of their last joint work, The Fifth Horseman, Collins has published three bestselling novels, Fall From Grace, Maze, and Black Eagles, while Lapierre published two nonfiction bestsellers, The City of Joy and Beyond Love.